Everything you need to know about Jesus!

He begetteth not nor is He begotten.

Islam teaches that Jesus (pbuh) was a man and a great Prophet just like the ones sent before him, Jesus is not God himself nor is he the son of God.

Furthermore, if Jesus (pbuh) was God, how could he worshiped God? And how could God died on a cross?

Jesus (pbuh) was Jewish, he was the last on the long list of prophets (Aron, Abigail, Isaac, Abraham, Jacob, Amran, Avner, Avishai, Ezra, Nehemiah, Zerubabbel, Jeremiah, Ezekiel, Daniel, Jonah and many more.. ) that were specifically sent to guide the Children of Israel and to aid in his ministry, Jesus (pbuh) was given the ability to perform miracles, all by the permission of God rather than of his own power.

Islam teaches that Jesus (pbuh) is one as the great prophets and muslims are taught that he will return to earth near the Day of Judgment to restore justice and to defeat the false messiah also known as the Antichrist (el masih al dajal). Jesus name appears 25 times in the Qur’an and Muhammad’s name 5 times (pbut).

Nowhere in the Bible is it written that Jesus (pbuh) had proclaimed that he was God himself or that he asked his disciples to worship him or to bow down or kneel before him.

Jesus is God himself was a rumor made by a small group of men who witnessed his miracles and that rumor eventually became an official religious doctrine at the first council of Nicaea in 325 AD under Constantine’s ruling.

Constantine saw a possibility to control a large mass of people and was acutely aware that religious division (as many early Christians did not see Jesus as God himself) was a real and serious threat to the established order of the Empire of Rome and he was determined not to let this take place. His coming down in favor of those who saw Jesus (pbuh) as God was, then, a matter of Political expediency rather than theological reasoning.

Constantine invited all 1800 bishops of the Christian church at the time (about 1000 in the east and 800 in the west) to join him at the council of Nicaea, but knowing how corrupt he was, only a small number showed up, bishop and Roman historian Eusebius of Caesarea counted 220, Athanasius of Alexandria counted 318, and Eustathius of Antioch counted 270 bishops present at the council. That day, they therefore raised Jesus to the rank of God, and changed the message of Jesus (pbuh) by giving partners to God. God was no longer One but 3 in 1.

An early testimony can be found in the Gospel of Barnabas stating that Jesus (pbuh) foresaw and rejected his own veneration:

Jesus (pbuh) said: “I confess before heaven, and call to witness everything that dwells upon the earth, that I am a stranger to all that men have said of me, to wit, that I am more than man. For I am a man, born of a woman, subject to the judgment of God; that live here like as other men, subject to the common miseries” (94:1)

NOTE: The Gospel of the apostle Barnabas was put on the catalogue of writings to be rejected in the Decretum Gelasianum by Pope Gelasius (Pope of Rome 492-96). More details can be found in the section: “The Bible and the Missing Books“.

Was Jesus crucified and his blood offered for the forgiveness of our sins?

When we study the Gospel of the Nazarenes, it is very clear that this doctrine was invented by men well after the death of Jesus (pbuh):

In the Gospel of the Nazarenes, Lection 33, verses 1-2, Jesus (pbuh) said to his disciples: ” No blood offering, of beast or bird, or man, can take away sin, for how can the conscience be purged from sin by the shedding of innocent blood? No, it will increase the condemnation”.

What is a Crucifixion?

It should be noted that the crucifixion was a common method of execution which was in use among the Persians, Seleucids, Carthaginians and the Romans from around the 6th century BC to the 4th century AD. 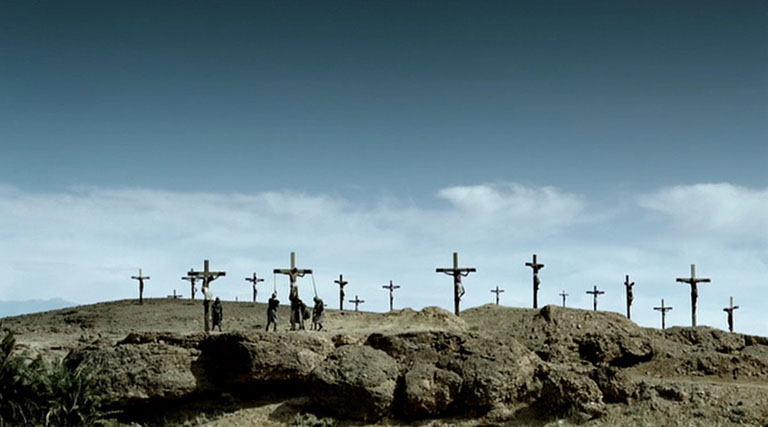 So what happened on the day of the crucifixion?

As it is reported in the early and late Scriptures, there are 2 theories and both theories attest that Jesus of Nazareth (pbuh) was not crucified:

The first theory attests that it was either Simon of Cyrene or Judas who died crucified that day and not Jesus (pbuh).

The second theory attests that on the day of the crucifixion, there were two men with the same name Jesus: “Jesus of Nazareth” (pbuh) and “Jesus Bar-Abbas” (a notorious criminal).

At the time of the crucifixion the language spoken was Aramaic. During this time in history, surnames as we know them today were not used. Instead people were simply referred to as their given name followed by “Son-of …”

When translated from Aramaic into English was does “Jesus Bar-Abbas” mean?  The word “Bar” means “Son” and “Abbas” means “the father”.

As just as it is written in the Apocryphal book of early Christianity “Jesus Son of the Father” was crucified that day.

In addition, none of the Gospels writers were present at the crucifixion and further more if it was the “Messiah, Jesus of Nazareth (pbuh)” who was crucified that day, why would the Abyssinian Church and the Coptic (Egyptian) Orthodox Church of that time raised “Pontius Pilate”: The Equestrian Procurator of the Roman province of Judaea from AD 26-36 and the presumed executor of Jesus Christ (pbuh) to Sainthood and assigned June 25th to St. Pontius Pilate day? The Ethiopian Orthodox Tewahedo Church also recognized Pontius Pilate as a saint in the sixth century.

All these facts confirm that the early Churches of Christianity were in accordance with Islam and that the “Messiah, Jesus” (pbuh) was not crucified.

What the Qur’an says about Jesus the son of God?

What the Qur’an says about Jesus God himself?

“No one to whom God has given the Scriptures and on whom He has bestowed wisdom and prophethood would say to men, ‘Worship me instead of God.’ He would rather say, ‘Be devoted servants of God, for you have taught and studied the Scriptures.’ Nor would he enjoin you to take the angels and the prophets as your lords; how could he command you to be disbelievers after you have submitted to God.” Qur’an 3:79-80