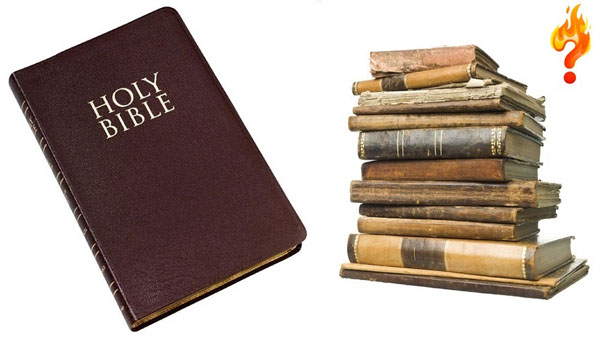 “This is to announce that I am proud to have become a Muslim. This is the natural conclusion of any intelligent theologian’s journey. All scripture study leads to Islam. Which makes all other scriptures redundant.”  Sinéad O'Connor

It should be stated at the outset, that we do not seek to put down the Bible.

The Bible (The Old and New Testament):

Contrary to the notion that the Bible is a single book that came directly from God, it is in fact a collection of 73 books written by several authors (some who remain unknown). It should also be noted that Jesus (pbuh) did not write and did not dictate to anyone what is written in the Bible.

As mentioned, the Bible is a collection of 73 books taken from The Old and The New Testament.

The list of the 46 books from the Old Testament (including the Deuterocanonical ones) and the 27 books from the New Testament were declared the official canon of Sacred Scripture for the Catholic Church by the synod (council) of Hippo in 393 AD, Carthage I & II in 397 AD and 419 AD. The letter of Pope St. Innocent I in 405 AD also officially listed these books, and in 1442 AD the council of Florence also definitively established the official list of 46 books of the Old Testament and the 27 books of the New Testament. (In other words, the church officially selected the 73 books which form the Bible).

So who are the authors of the 73 books that form the Bible? The Church believed the Holy Spirit inspired the authors of Sacred Scripture to write down God’s revelations.

So if some of the authors are unknown, how could a combination of these books be put together and be called the divine word of God?

How could the church say that the Holy Spirit inspired the authors, when they don’t know who they all are?

Not only do most of the Gospels whose authors were well known were not included in the Bible, a lot of them were burned between July 306 – Octrobre 312AD during the reign of Constantine.

Few centuries later, a friend of Pope Sixtus named Fra Marino found the Gospel of Barnabas in the Pope’s private library and decided to translate it into Italian. In 1738 the manuscript found its way into the Austrian National Library, where it remains today.

Note: The Apostle Barnabas was stoned to death for having refused to distort the truth about what he saw and about Jesus prophet of God (pbuh), to read sections of the Gospel of Barnabas (which was translated into English in London in 1907) please click here.

In addition to these mysteries, the Protestant version of the Bible has fewer books than the Catholic version. It has 66 books and no one seems capable of offering an explanation beyond the doubtful authorship of 7 books of the Old Testament (For more information regarding the Protestant and Catholic Bibles you can read The Missing Books of the Bible by Father William Sander, dean of the Notre Dame Graduate School of Christendom).

It is for these reasons that Muslims tend to believe that the original scriptures have been corrupted and don’t abide by them, choosing to follow the last scripture sent by God, the Qur’an.