The Universe, God's creation or a pure accident? 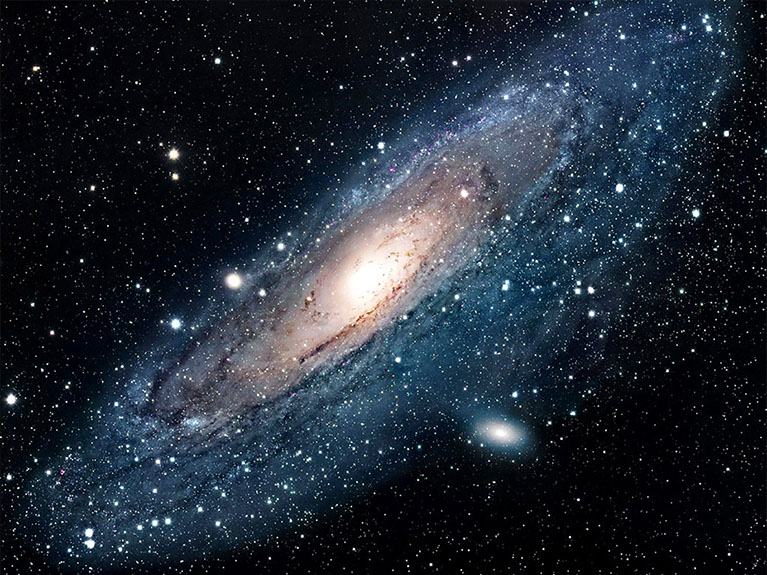 To become a Muslim one must believe the “Shahada: “there is no god but God and Muhammad is his messenger”.

But does God really exist? or is the Universe a simple accident?

The question one must ask in order to determine the probability of it being accidental is:

If the components forming the clock were thrown in the air, would it be possible for them to fall down and land assembled with the precision required to keep the correct time? Everyone agrees it is impossible.

Now, examine the universe through a telescope and consider the question of the clock. Ask yourself if the precision involved in the universe could be accidental. Furthermore, consider what happened on February 27, 2010:

NASA geophysicist Richard Gross and other seismologists estimate that the earthquake in Chili on February 27, 2010 (which rated a magnitude of 8.8) was so powerful that it has shortened the length of the day by 1.26 microseconds (millionths of a second) and moved the earth’s axis off its rotation by 4 inches or 2.7 milliarcseconds. 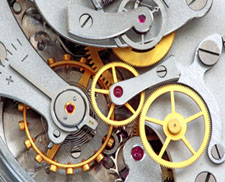 The earth moves around the sun at 107244 km/h and rotates every 24 hours at a speed of 1674,38 km/h while the universe is in constant expansion and an earthquake caused a delay of 1.26 microseconds. 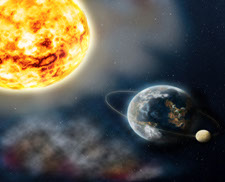 Now that we established that the Universe can not be an accident, did God really send these messengers (pbut) to let us know of his existence and what is expected from us?

Let’s take a look inside the Qur’an to see what is said about the creation of the universe, the earth and the skies and see if Muhammad could have been the author (some phenomena has only been discovered recently by astronomers):

Expansion of the Universe:

The expansion of the universe is one of modern science’s most startling discoveries, yet 1400 years ago, when there was no understanding of how the universe functioned it was revealed to Muhammad (pbuh) that the universe was constantly expanding.

“And it is We who have constructed the heaven with might, and verily, it is We who are steadily expanding it.” (Qur’an 51:47)

The word “heaven,” is in use in various verse of the Qur’an, and refers to either the universe or the sky above the earth. Here, the verse speaks of the universe expanding, which is the very conclusion science has reached today.

The Layers of the Atmosphere:

One of the facts about the universe revealed in the Qur’an is that the sky is made up of seven layers.

“It is He Who created everything on the earth for you and then directed His attention up to heaven and arranged it into seven regular heavens. He has knowledge of all things.”

“Then He turned to heaven when it was smoke. In two days He determined them as seven heavens and revealed, in every heaven, its own mandate.”

Scientists have found that the sky surrounding the earth (atmosphere) consists of seven layers. The layers differ in physical properties such as pressure, types of gasses, etc… and each one of these layers has its own mandate (just as mentioned in Verse 41:12) or vital duties for the benefit of humankind and all other living things on earth .

From forming rain, to preventing harmful rays, to reflecting radio waves, or averting the harmful effects of meteors, each layer has a particular function.

One of the elements highlighted in the Qur’an is iron, which was sent down to earth from space.

“…And We sent down iron wherein is mighty power as well as many benefits for mankind…”(Qur’an, 57:25).

Professor Amstrong works at NASA where he is a well-known scientist. When he was asked how iron formed, he explained how all of the earth’s elements were formed. He stated that scientists have only recently come to discover the relevant facts about the formation process and that the energy of the early solar system was not sufficient to produce elemental iron.

The iron found on Earth, as well as the iron found throughout the Solar System, comes from outer space, since the temperature of the Sun is inadequate for the formation of iron.

The energy required to form one atom of iron was found to be about four times as much as the energy of the entire solar system. The temperature at the surface of the Sun is 6,000 degrees, and the core temperature, meanwhile, is about 20 million degrees. Iron can only be produced in stars much larger than the Sun, where temperatures reach several hundred million degrees. When the amount of iron in a star exceeds a certain concentration, the star can no longer accommodate it and explode in what is called a “nova” or a “supernova.” These explosions allow dispersion of iron in the Universe.

Professor Armstrong concluded: “it is very difficult to imagine that this knowledge revealed in the Qur’an fourteen centuries ago could have come to Prophet Muhammad (pbuh) from a human source”.

God revealed to Muhammad (pbuh) that the universe was full of orbits and paths.

Muhammad (pbuh) did not know what a telescope was, so where did he got his knowledge of astronomy, unless it was revealed to him by the creator of the Universe?

Concept of the Relativity of Time:

Today, the relativity of time is a proven scientific fact, revealed by Einstein’s theory of relativity in the early years of the 20th century. Until then, people were unaware that time was a relative concept which could change according to the environment. Yet the great scientist Albert Einstein proved it with his theory of relativity. He demonstrated that time is dependent on mass and velocity and that time can speeds up or slows down. In all of human history, no one had clearly expressed this before except the Qu’ran:

“And verily We created the heavens and the earth, and all that is between them, in six Days, and naught of weariness touched Us. (Qur’an 50:38)

The verses referring to the “six days” use the Arabic word “youm” (day). This word appears several other times in the Qur’an, each denoting a different measurement of time based on different events. In one case, the measure of a day is equated with 50,000 years (Qur’an 70:4), whereas another verse states that “… A day in the sight of your Lord is like 1,000 years of the way you count” (Qur’an 22:47). Therefore, the Qur’an demonstrates that time differs based on the event and is not constant, just a proven in the 20th century by Einstein.

Without the concept of the Relativity of Time as described in Verses 70:4 and 22:47, it would be hard to comprehend how the Universe could have been created in six of our days.

The fact that no one knew that the time could change up to the 20th century and the fact that it is clearly mentioned in the Qur’an is further evidence that Muhammad (pbuh) could not be the author of the Qur’an and that he could not have copied it, as it is not found in any scriptures prior to the Qur’an.

Bearing what you have read on this website in mind, ask yourself could this very complex, precise and majestic creation be a simple accident? Could the Qur’an really be the work of a simple illiterate man of the 7th century? Or is it by the one who sent Muhammad and all the messengers before him (pbut)? The Originator of the Universe himself?

The only logical conclusions are:

1- The universe can not be an accident, so there is a God, and since none of the laws of the universe are duplicated or conflict with each others, there can only be One designer, therefore: “There is no god, but God”.

2- And since Muhammad can not be the author of the Qur’an, he can only be the messenger of God, therefore the “Shahada” (Testimonial of faith) is correct:

“There is no god but God (Allah) and Muhammad is the Messenger of God (pbuh)”.